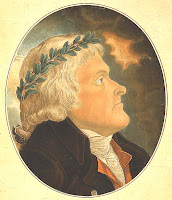 Thomas Jefferson has clearly arrived in the world, as he's got his very own wiki. I discovered this today as I combed the Internet to bring you a story with intrigue...and vegetables.

Who loved vegetables more than TJ? Nobody, that's who. He described meat as "a condiment to the vegetables which constitute my principal diet." Dude loved his salads, and meals at the White House during his Presidency were multi-course affairs full of all manner of delicious plants. An avid gardener, Jefferson experimented with exotic vegetables at Monticello, including a good number of new plants collected by the Lewis and Clark expedition, and all kinds of crazy squashes and vegetables imported from Italy. He's often credited with introducing broccoli to the United States, though it never really caught on in the U.S. until after World War I (and with some Americans, like 41st president George H.W. Bush, it never caught on).

Jefferson's lifelong love of horticulture must have tied into his desire to make the new nation more visible on the global scale by discovering and cultivating new exports. In the Southern states, an important cash crop was rice, and when he visited the court of Louis XVI in 1785, Jefferson wanted to convince the French to buy more American rice. Carolina rice hadn't been selling so well in France. Jefferson thought that maybe this was due to the fact that it looked different from the European varieties they were all used to, though whether it was intrinsic to the particular breed of rice or had to do with the way the rice was cleaned and prepared, Jefferson wasn't sure. So he resolved to figure out how to improve it, and that meant a trip to the rice center of Europe - Lombardy, Italy. The variety of rice, called Piedmont, that was grown there did very well in France. The secret to their awesome rice was carefully guarded - the penalty for taking whole husks out of the country was death.

This didn't stop Jefferson, though. He stuffed some unhusked Piedmont rice into his jacket pockets and arranged for a muleteer named Poggio to smuggle some more from Lombardy to Genoa, in hopes that maybe cross-breeding the rice with the Carolina rice would produce a variety more palatable to the French.

As it turned out, he risked life and limb for pretty much nothing. Italian rice was cleaned just about exactly the same way as the American rice, and it didn't even taste that much better. In fact, farmers in Carolina hated the Piedmont rice, and were afraid that crossing it with their own rice would ruin their crops. It turned out there wasn't anything weird about their rice that made the French not buy it, anyway, it was just that it was expensive due to the fact that it came to France via British middlemen. Jefferson urged farmers to send their rice directly to France, and everyone was happy, except maybe the British.

Later on, Jefferson also experimented with rice from Egypt, West Africa, and the Dutch East Indies, and tried for years to get rice from China and Vietnam, enlisting the help of everyone from sea captains to deposed Eastern royalty. He grew various types of rice in flowerpots on his windowsill to test its tenacity. Man knew his rice. Of course, he was Thomas frickin' Jefferson -- he knew pretty much everything.

Here's a sketch from The Daily Show, all about Jefferson and his vegetables, starring Steve Carell.
Posted by Jess at 6:36 AM