He made Westerns...and also this.

Today, on BoingBoing, there was a link to a fantastic little piece of forgotten history: Vietnam! Vietnam!, a pro-war documentary produced by the U.S. government and directed, at least nominally, by legendary Western filmmaker John Ford. The blogger who's presenting the film calls it "quite terrible," but the story of the film itself is fascinating.

You can view the entire film, plus read the original treatment, at the above link.
Posted by Jess at 11:16 AM No comments:

Friday Links really should have been on Mount Rushmore

With that in mind, here's an all-Adams Friday Links.

It seems like nearly everybody I know watched the opener to the John Adams miniseries last night. I did not, but it is on my DVR and I'll post thoughts as soon as I get caught up.

One thing that strikes me - with all this attention paid to the miniseries, and the way the public has recently devoured various history books by McCullough, Ellis, and the like, geeking out about American history is cool again. This makes me happy - and it inclines me to put some more elbow grease into this blog, in hopes that I can sustain the history love just that much longer.

So if you have story ideas, suggestions, or if you'd like to guest blog, drop me a line or even just comment here. 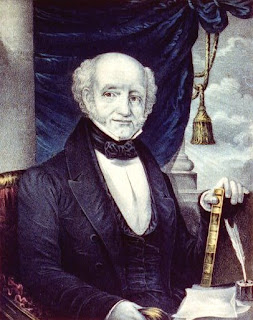 Okay, you probably don't know that much about him. I didn't myself until recently. Thanks to Cecil Adams, and a number of sources at work, I now know more than I ever thought I would about this man. In the process, I discovered what's probably Van Buren's greatest contribution to American life - namely, he likely originated a very important piece of American slang.

Van Buren was of Dutch extraction and was born and raised in the Dutch-American enclave of Kinderhook, New York, earning him the nickname "Old Kinderhook" when he began campaigning for President in 1836. Eventually, his Democratic supporters in New York State took that name for their political club, and abbreviated it "OK." "OK" had previously been used as a jokey editorial abbreviation meaning "oll korrect," but it was its double meaning in politics that caused the expression to really take root.

Although his attempts to build an independent treasury are often underemphasized when talking about his political contribution, Old Kinderhook was generally regarded as less than OK by his contemporaries, and historians have been no kinder. He was unseated fairly handily by Whig candidate William Henry Harrison in 1840, though he remained politically active for the rest of his life, primarily devoting himself to the abolitionist cause. He attempted to run again for president in 1844 but the Democrats declined to back him, so he formed his own party, the Free-Soil party, and tried again in 1848. You have to admire the guy's tenacity.

The Miller Center of Public Affairs at the University of Virginia has an excellent gateway page to all the Van Buren trivia you could ever want.

Should you ever feel like visiting Kinderhook, stop by the Martin Van Buren National Historical Site. If the Metro-North ran that far up, you can bet I'd be doing exactly that ASAP. As it is, I think it'll have to wait until I can join forces with fellow geeks who are also car owners.
Posted by Jess at 10:06 AM No comments:

Even though I'm right up against a major-ass deadline at work, I still found time to dig up an economy-sized links package for y'all this week. Read and enjoy!

I'm posting Friday links a little early this week for a couple of reasons. First off, I want to make up for my poor showing last week. Secondly, I wanted to let all you JFK buffs out there know that his alleged illegitimate son is going to be on 20/20 tomorrow night. Check your local listings for more info.
Posted by Jess at 7:59 PM 2 comments:

I must share this modern classic with you now, along with the brilliant animation that accompanies it.

Warning: If you are at work and you have computer speakers, this may not be appropriate. The video is marginally un-work-safe as well.

Another warning: This is probably not strictly historically accurate.

There's at least one more Cox and Combes/Brad Neely video with some historical relevance floating around out there, but I don't want to overload you. So I'll save that one for another time.
Posted by Jess at 6:48 AM No comments:

"Apology is only egotism wrong side out." - Oliver Wendell Holmes

We lost our internet connection at work on Friday, so I was unable to get the Friday links up. I'll be sure to super-size them this week, though - hang tight.

In the meantime, Warren G. wants YOU to enjoy the site's brand-new and totally public domain look, which was conceptualized and built for me by the very talented and graphics-capable Daryl Lang, who was troubled by the fact that I was using a copyrighted photo in my logo. Frankly, I was troubled too. One nice thing about making my blog be about history is that I should be able to come up with tons of content that doesn't step on anybody's copyright toes. Therefore, I'm happy to report that this blog is now totally free of anything that does that.

Also coming up this week - more exciting stories about rice. Seriously.
Posted by Jess at 6:40 AM No comments: