Did Andrew Jackson really shoot a guy in the junk? 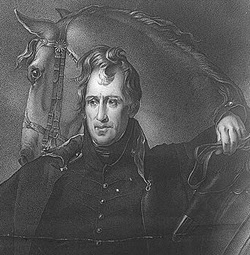 In an earlier post, I showed you a fantastic rap video that featured, among other things, a kid dressed like Andrew Jackson claiming to have shot a guy in the testicles.

Clearly, this is something that, if true, involved both history and funny, and I've meant to explore it for quite some time, and in the process I have become better acquainted with the man who is perhaps the biggest badass ever to have served our country as chief executive.

Most of what you probably know about Jackson is pretty textbook: he's on the twenty. His nickname was "Old Hickory." He fought in more than one war. He had really funky hair. He destroyed the national bank. He was really awful to the Native Americans.

Good or bad, these things only barely hint at Jackson the Badass. It wasn't until I read a couple of accounts of his 1806 duel with Charles Dickinson (this one and this one are both especially good) that I fully appreciated his badassery.

Jackson loved duels. He participated in over a dozen of them throughout his life, but his duel with Dickinson was the only one that ended in someone actually dying. In this instance, Dickinson had insulted Jackson's wife, Rachel, because she was a divorcee (Jackson was her second husband), which understandably pissed off Mr. Jackson. (Apparently he defended his wife's honor a lot. More power to ya, Andy!) So the challenge was issued, and the men rode from Tennessee into Kentucky, where duels were still legal, to engage in their competition.

You may know this from reading up on the Hamilton-Burr duel (at least I did), but the code duello that governed dueling practices of the day basically gave the following rules:

1. The men stand 24 feet apart.
2. A signal is given.
3. Both men very quickly draw, aim, and fire. If one of them dies, the duel's over.
4. Whoever shoots first has to wait for the other guy to shoot before he can shoot again.
5. After both men shoot, if they're both still alive, they can call it a draw and go home or they can keep shooting. (Most of the time, the duelers were satisfied by having both gotten a shot out, and just by showing up, you'd proven that you were a gentleman after some fashion, so mostly I think they just shot and went home.)

Because you have to draw and shoot so quickly under these rules, it's no wonder so many people lived through them - it's pretty hard to do, especially with an early-19th-century pistol.

Rule number 4 came into play in the Hamilton duel because Hammy shot first - straight up into the air - some say intentionally, in hopes that Burr would fire into the air too. (Spoiler - he totally didn't.) In the Jackson-Dickinson duel, Jackson decided to play that rule the other way. Dickinson was a far better shot on the quick, so Jackson figured he could buy some time by letting Dickinson get a shot off first and then pausing to aim.

That's right, he let the other guy shoot directly at him. Badass!

And the other guy hit him. In the chest. Even more badass! (The bullet, inches from Jackson's heart, was too dangerously placed to be removed, so it stayed there for the rest of his life.)

And then Jackson calmly placed one hand over the wound, cocked his gun, aimed carefully at Dickinson's midsection, and fired, killing him. That's so badass it makes 50 Cent look like a basket of fluffy kittens.

(And it's more than a little bit unsporting, many people would argue.)

So is he badass? Hell to the yeah.
Is he a dirty cheater? Possibly.
Did he really shoot a guy in the jewels? Inconclusive. Some sources say "groin," others say "middle," still others only point out that he died. I'm going to guess not, though, because most accounts explicate that Dickinson was shot once and died on the spot, and getting hit in an extremity like the testicles probably wouldn't kill you instantly. The femoral artery, maybe, and the gut, possibly, but right square in the nads wouldn't necessarily have done the trick, I don't think.

I guess it's a little bit more amusing if that's what happened, but the idea of Jackson taking a bullet to the chest without flinching is funny enough on its own.

Next time, I'll tell you about his cursing parrot.
Posted by Jess at 10:25 AM

I'd have to agree on Jackson being a complete badass. Also to add to this, he was in a total of 103 duels in his lifetime, and to add to his badassery was an assasination attemp made on him. A man by the name of Richard Lawrence was duranged and thought since he voted for Jackson in the election, he deserved a spot on his cabinet. When Jackson declined he tried to assisinate him using 2 pistols. He confronted jackson outside of the white house when jackson was just leaving and when Jackson saw the pistols it immediately pissed him off, and HE CHARGED AT HIM! So Jacksons charging at Lawrence who has one of the pistols out and Lawrence fires but the pistol mis-fires at 12 feet away, Lawrence takes out his next pistol while Jackson in his mid-50's is still charging at him is again fired at, and ONCE MORE his next pistol mis-fires! Jackson then proceeds to kick the shit out of the man with his Hickory cane in front of the White House. Experts say the odds of 2 pistols misfiring in a row are 1 to 125,000 and that Lawrence probably messed up when loading and put something like wet gunpowder in there.

We have a great history of hero types,life is funny!D.Crockett,Dan Boone,Andy Jackson,Ron Reagan etc.we need to let the riff-raff politician theives and cowards be tried and shot as treasonous snakes they are. no sense lettin a good gun go to waste .they willfully go and cause harm to the people,let them reap by and for the people (us).We have our Sovreignty betrayed and been sold out to marshall law and traitors (United Nations,counsel of foreign affairs,nato,Writing is on the wall
we,ve been sold out to highest bidders lobbyists and have undermined our children and grandchildrens futures WAKE UR AMERICA WERE THE FROG AND THEIR TURNING UP THE HEAT.splat!bye red runner

I think Jackson, pretty much before getting inaugurated, his wife Rachel Jackson died. Because of his campaign for president, rivalry had sparked up between him and Adams (since Adams had won the first time, they were pretty much enemies) causing them to fight dirty by dissing each other. One of the things that Adams attacked Jackson, or rather Jackson's wife, was not for her being a divorcee, but because she had NOT divorced with her first husband before marrying Jackson. However, since Rachel died, Jackson said that he would forgive everyone who made attacks on his character, but would get revenge on all who had attacked his wife. Just pointing out a tiny inaccuracy. By the way, Jackson was a drinker, gambler, frontiersman (which to the society of that time, meant uncivilized), and the man for the people. It was also because of his campaign that these days, there is a golden, probably unspoken rules, that politics people can say whatever they want about the other politics people, but LEAVE THEIR FAMILY OUT!